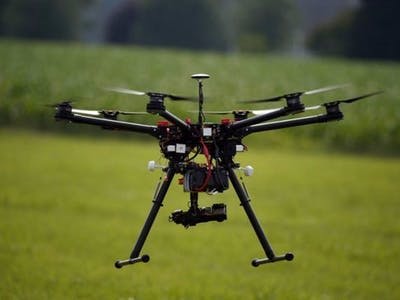 When I saw the specifications for the Walabot Pro device I knew that such a device would be useful for a commercial inspection drone. I have wanted to use an ultrasonic system but immediately discarded the idea because I knew propeller noise would prevent useful measurements from being made.

With Walabot Pro since the sensing is done with radio frequency energy none of these problems exist.

There are two problems that I hope to solve:

Since the service being paid for is inspecting and not crashing, avoiding crashes is the first priority.

2) Holding a fixed position with respect to the thing being inspected while hovering.

A great deal of help can be given to the pilot if the drone can be made aware of its environment such that the done can hover precisely near the object that is being inspected.

The project is divided into two parts

The Walabot Pro must be proven to be suitable for solving the problems mentioned above. So I will use a laptop to explore the Visual Studio 2015 example projects and develop my own project geared towards solving inspection drone problems. The things learned doing this will let me know how practical the system is and how much effort is worthwhile on the next phase of the project below.

What Walabot can see

What Walabot can not see

Balsa wood sticks, these sticks are oven dried in production , so there is very little moisture and little material for Walabot to detect. Walabot could see a hardwood walking stick with a finish on it. Since I have seen drones used for spraying crops in farming , therefore in certain applications I could see using a mist of water being used to produce contrast that would otherwise be lacking.

I have additional work to do proving the merit of changing the viewing angle of Walabot slightly and collecting more data to produce a composite picture of a scene with higher degrees of confidence on the placement of objects in the scene.

Some significant effort must be made to separate detected objects from noise when the detecting range extends to 2 to 3 meters. Walabot will be useful as a ranging and detection method used in conjunction with optical methods. The resolution does not seem high enough to provide a pilot assistance feature without also using optical methods. This should not be taken as a criticism of Walabot! I had no expectation that Walabot would replace optical sensors on inspection drones.

The three C++ example Microsoft Visual Studio projects, InWallApp, BreathingApp and Sensor_SampleCode from Walabot were used to get familiar with the Walabot API. They make a nice starting point for development of an App for commercial inspection drones.

Practical work towards a flight platform for Walabot Pro.

I am developing a Drone Walabot system using Raspberry Pi. Python seems to be a good way to develop an app that could be easily run on Rapberry Pi and rigorously tested on Windows or other platforms

1) Get the SDK for Raspberry Pi

A fairly complicated task remains to make the Walabot API remotely controlled through a communications link. Under consideration is the WiFi or Bluetooth wireless links available on Raspberry Pi 3 . An LTE modem is also under consideration. This is a fairly large task that I am not expecting to finish quickly.

Getting Started on using the Walabot API through a wireless link

I am guessing that there are more code examples for Raspberry Pi in Python than in C/C++, so my efforts will start with Python. I have already used Python to access GPIO on Raspberry Pi so I am confident that I can build a large system with servos that points Walabot takes measurements and then slighty changes the Walabot aim and then takes more measurements. This mimics the way animals use vision and hearing while hunting prey. I am also confident of using Python to make this system an IoT device. Here is a link for using the Walabot API from Python.

The python example codes were installed at the same time as C/C++ examples so there are no extra steps to get started with the Python examples. So start the Python IDE on Raspberry Pi and load the example code of your choice found in the directory /usr/share/doc/walabot/examples/python and start having fun.

I will keep hacking on the Sensor app example in Python, adding one major functionality at a time, until the dream is fulfilled.

Sensor App in Python is running!

Walabot Drone Concept 1 use a Walabot Pro to replace a camera on a remotely controlled gimbal camera mount. The gimbal will likely be very useful to make slight changes in the orientation of the Walabot Pro to help improve the confidence of object detection. This would be useful for preventing collisions, but I have a second concept that I prefer for commercial inspection work. Walabot Drone Concept 1 is a lower cost implementation that will satisfy a segment of the inspection drone market.

A mockup based on a very small drone to demonstrate the concept.

I am working on raising funds for a fairly large inspection drone which will cost $2000 to $5000 (USD) to build.